Here is my rock garden, halfway through the summer, on this first day of August.  I cannot say I am pleased with its overall effect: 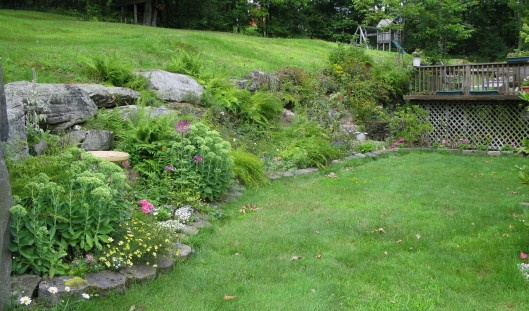 While there are a few stand-out flowers, it lacks color.  Further, though I do prefer a cottage look over a more formal style, my garden strikes me as a bit too wild and weedy.  I think it’s time for a major overhaul!

I actually began the reworking process back in early June, when I dug up, separated, and replanted the black-eyed Susan section of the garden.  Contrary to my expectations, several of those re-planted stems are blooming now:

I expect the Rudbeckia to spread and fill in a great deal of this area, and it will be very bright in mid to late summer.  I want to exert a little control over them, though, and leave space for some earlier blooming perennials, and some annuals to provide more consistent color.  I think some hot yellow coreopsis, the cherry-red geum Mrs. Bradshaw, and a small stand or two of purple cleome would all play nicely together here.  I think group plantings will be the way to go, creating large drifts of color, rather than randomly placing individual flowers.  This garden is a large space, and this particular section is at the greatest distance from the most common viewpoint, so masses of color are necessary to draw attention.

Moving left from this space, there is a rhododendron bush which blooms well for a couple of weeks each May, and a hybrid tea rose, which grows very tall, but has never once in five years bloomed.  It gets just one more year!  Next to that

disappointment was a clump of irises which hadn’t bloomed in at least two years.  I believe they are pale purple, but I’m not positive!  Two weeks ago, I dug up and separated the rhizomes, discarding the larger, never-to-bloom-again mother plants, and re-planting a few of the babies.  Two friends were happy to take away the rest of the babies to their own gardens.  In this space, I planted three irises in the back, and put in a new Russian sage in front of them:

I look forward to the large cloud of smoky blue blooms the sage will boast in mid to late summer, several weeks after the irises finish.  However, I am concerned that either the iris or the sage will eventually grow too large to share this space with the other; time will tell!  The small cleome stems in there are self-seeded, and there is a very small clump of coreopsis in the left front corner.  It can stay for now.

Still to the left, not pictured, there is a small section of brown candytuft stems.  Billowing with snowy white drifts in the spring, it is now an eyesore.  I am at a loss about how to handle it.  There is new growth on the ends of some of these brown stems, so I don’t want to cut it all back.  Or can I cut it far back completely and still have it grow next spring?  Do any of you readers know how to deal with candytuft?  Please feel free to advise me!

What follows was just a mistake.  Last summer I transferred some bee balm (monarda) into the rock garden.  I wanted to add some height to this part of the garden, but this has grown too tall.  Additionally,  the red clashes with the rest of the flowers here; and, to my eyes, it is just ugly:

Even though I’m not fond of it, the monarda has some advantages which save its hide.  The woodchucks do not like it, but the hummingbirds and butterflies do.  This fall I will pull as much of it out as I can, and replant it around the outside of the vegetable garden fence.  If it gets too tall and starts to lean, I can just tie it to the fence.   It will also be nice to have some tall color there, visible from my dining room windows.  I think cleome would be a good replacement for the bee balm here.  It will serve to draw the eye up without looking awkward and gawkish, and act as a unifying element within the garden.

I’ve explained my love-hate relationship with my ferns in the past.  I don’t want to get rid of all of them, but I must remain vigilant in pulling them out so they don’t crowd out other, more colorful plants.  The poor threadleaf coreopsis here was largely overshadowed by the ferns when it bloomed this year:

Continuing our trip to the left, we pass by a couple of rose bushes that, with regular pruning, will flower all summer.  They win the privilege of staying in place!  Then there are yet more ferns, and an enormous Autumn Joy sedum.  A good friend passed this on to me from her mother’s garden, and it will be stunning by the end of this month.  It gets to stay, too.

The end which anchors this garden is truly a jumble.  I have simply dumped too much stuff here over the years, and it needs a good purge:

You can see the huge sedum on the right hand side of this picture.  You can also see that coreopsis, geum, pincushion flower, coral bells, cleome, and other annuals all fight for space between it and the birdbath.  I liked the combination of the red geum and yellow coreopsis earlier in the summer, but it seemed like too much heat for this space.  In September I will move them to the other end of the garden, by the black-eyed Susans.

The area in front of and to the left of the birdbath is equally crowded with annuals, perennials, and succulents: 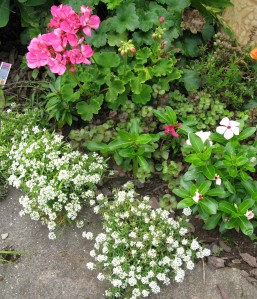 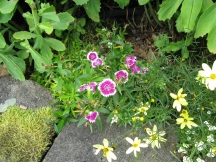 Plants here include dianthus, threadleaf coreopsis, coral bells (which barely bloom, by the way), veronica, dragon’s blood sedum, hens and chicks, vinca, alyssum, portulaca, May night salvia, and ageratum.  Each of them is a beauty in itself, but put together, it seems little much; don’t you agree?  Again, this space seems to call for masses of color, rather than so many individuals.  I would like the cleome to be a key player here, as well.  It seems to do well in this garden, and has, for the past four or five years, been anathema  to woodchucks.  (Knock on wood, fingers crossed, etc. . .!)

There’s even another fairly large Autumn Joy sedum, backed by what else but ferns:

For the next several weeks, I will ponder my vision for this garden.  What gets to stay, and what must be moved?  Do I like the Autumn Joy well enough when it blooms to put up with so much green for the rest of the summer?  (The answer is probably yes.)  Should I move those non-blooming coral bells to a new location where they may do better, or do I give them another chance right where they are?  (I suspect they should be moved somewhere a litlle shadier.)  How can I best incorporate more of the summer-long color I crave and still keep most of the perennials?  If you’ve made it to the end of this lengthy post, perhaps you have some ideas for me!  I know many of my readers have beautiful gardens of your own, with designs I very much admire, so please, I’d love to hear some suggestions!  What would you do with this space?

3 thoughts on “Garden Design on My Mind”